You are here: Home / Archives for Economics

The Marcellus Shale alone accounts for one fifth of total U.S. natural gas production, and the massive deposit is partially responsible for the United States becoming one the the world leaders in energy production.  The real power behind U.S. natural gas production comes from the shear quantity the country is able to produce.  On the international market, the U.S. is quickly becoming determinant in setting energy prices, and as industry technology improves so will the country’s power over other producers.  There is so much natural gas in the U.S. that, due to innovations in fracking technology, the country could supply its own needs for 400 years and those of the world for 85.

Economically, this kind of quantity of natural gas gives the United States incredible power in terms of international trade. Without flooding the market and driving prices down even further, shale reserves allow for the ability to act as a battery for global demand.  Storing the newly available natural gas is vital to the economic power in fracking. In fact, the discover of new fracking methods and access to large shale formations such as the Marcellus formation has altered recent U.S. outlooks.  Before 2008, the U.S. was prepared to allow increased imports of natural gas so as to keep up with domestic demand. Since then the country has become an exporter, and a powerful one at that.

However, this is not to say that natural gas production is fool-proof.  Fracking as a means of retrieving the valuable resource is very sensitive to international prices.  If global prices for natural gas drop too low, fracking is longer an economically viable method.  As a result, a drop in prices in 2014 caused a call for the reduction of natural gas production in 2015 by some of the industry’s largest players.

Marcellus Shale (and Others) Making US International Energy Powerhouse One of the renewable natural resources most severely impacted by fracking is groundwater.  The fluid used throughout the process carries with it very toxic chemicals, which inevitably leak into the local groundwater systems and contaminate drinking water.  Aside from the obvious social and environmental implications of fracking, groundwater contamination carries with it an economic cost as well. 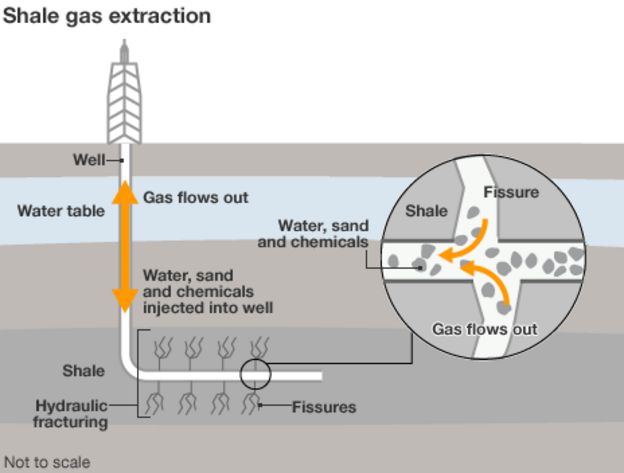 One of the biggest problems of fracking with regards to groundwater contamination is the use of horizontal wells.  These wells carry with them the toxic fracking fluid, and are four times more likely to leak as conventional vertical wells.  The economic drawback to leaky wells is the need to replace them.  With failure rates in Pennsylvania as high as 8.9% in newly drilled wells, this could mean thousands of replacements that the fracking companies have to pay for.  Maintaining and fixing these wells becomes especially important when they lie in areas where groundwater contamination affects local residents.

Furthermore, a steadily increasing U.S. population reflects the increased global need for fresh water.  Any large-scale water contamination means the contamination of a valuable resource.  Although many may overlook this factor, water, especially groundwater, carries with it an economic value.  Half of U.S. households rely on groundwater, and “in the United States, Oil and Gas drilling accounts for about 1% of total water consumption”.

Groundwater contamination has been shown to lower property values, and the need to truck in fresh water for the sake of fracking itself carries with it a cost for fracking companies.  Through a refinement of the process used to construct wells, the danger of leakage can be reduced by 50% by some estimates.  Although changing the protocol and technology for well digging would bring with it immediate economic costs for the companies, the long term impacts of safer methods would show a more fiscally and environmentally responsible approach their business.

Risks to Water by Fracking