You are here: Home / Archives for People 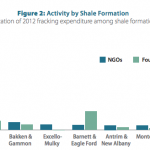 Non-governmental organizations, or NGOs, are non-profit, voluntary, citizen-created groups designed to “perform a variety of service and humanitarian functions, bring citizen concerns to governments, advocate and monitor policies, and encourage political participation through provision of information” (Definition of NGOs). Recently, environmental NGOs have begun to publicly take stances on fracking, almost unanimously in opposition to it. On April 24, 2012, Greenpeace produced a report in conjunction with Food & Water Europe, Friends of the Earth Europe, and the Health & Environment Alliance. This position statement details the various negative environmental impacts of fracking, including (but not limited to) water pollution, water usage, climate change, soil pollution, air pollution, and seismic activity. Additionally, the statement calls for the cessation of all ongoing activities, as well as proposed activities.

It is difficult to gauge the exact impact of NGOs, but it is clear that they are growing in power. A 2013 report surveyed a total of 81 NGOs, who reported spending $17.4 million in 2012, and 33 foundations, who reported spending $18.3 million. Philanthropic support is crucial, as is a volunteer labor force. Environmental NGOs and advocacy foundations have been particularly active in the Marcellus Shale region, with nearly $20 million in combined expenditures out of the total $35.5 million.

So why has fracking been met with so much opposition? For one, citizens in towns where fracking is actually taking place have been scared by reports of methane contaminations in their water supplies. Though it is hard to conclusively determine the root cause of these methane leaks, fracking could provide a potential explanation.

Many fracking sites, including the Marcellus Shale region, lie under watersheds which are used to supply drinking water to local towns. In order to reach this region, workers build casings around the regions they drill to reach the natural gas deposits. Drilling through this aquifer region is clearly outlined in the image below:

Problems arise when these casings are not sealed properly. Holes within these seals enable gases to leak out and may explain the methane contamination of within local water supplies.

An initial study in 2011 looked at methane concentrations in 68 drinking water wells at varying distances from fracking sites in the Marcellus Shale region. They found that “methane contamination rose sharply with proximity to natural gas drilling and hydraulic fracturing.” Interestingly, however, when this type of study was repeated in 2015 in 11,309 drinking water wells within the same region, there was found to be no significant differences in methane concentrations based on proximity to the tracking site. Conflicting studies such as these two are continuing to surface making it difficult for scientists to develop a firm stance on fracking’s impact on local water supplies. 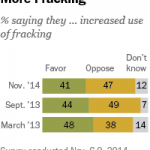 Polls, while arguably easy to manipulate, are one of the best methods for gauging public opinion on hot topic issues. Three polls, all conducted between 2014 and 2015, give an intriguing overview of the public’s stance on fracking, with results ranging from very supportive to outright rejection. The earliest poll, conducted by Pew in November of 2014, shows that while opposition to fracking did not increase from 2013, the number of those in support of fracking decreased. In other words, people are in the process of shifting from support to opposition, but many are still in the in-between phase. The second poll, conducted by Gallup in March 2015, paints the conversation as more evenly split, with 40% of the population favoring fracking and 40% opposing it. This also shows that a large percentage of the public is generally ambivalent, which could be a result of misinformation or a lack of education. An important factor for both sides to consider is the paucity of knowledge about fracking, and the serious need for informational outreach. The final poll is most specific to the region we are studying, the Marcellus Shale. This poll, conducted by Robert Morris University, surveyed exclusively Pennsylvanians in mid-2015, and found that an overwhelming 57% supported fracking. 74% of these supporters cited economic enhancement as a primary reason for their opinion, which is logical considering the fact that these are the people who would be benefitting most from future employment. However, it is also important to note that this poll demonstrated a concern for environmental damages, specifically pollution and earthquakes. Though Pennsylvanians support additional fracking at face value, they still prioritize their land and would like to see it used as sustainably as possible.

Pew: How Americans View the Top Energy and Environmental Issues

Fracking is arguably one of the more polarizing issues plaguing the nation currently. While there are numerous stakeholders taking a multiplicity of perspectives, the discussions often seem to fall into a dichotomy between economics and the environment. It is easy to boil down an opinion on either topic– fracking has been very profitable for energy companies, yet clearly disrupts ecologies–but it is also important not to trivialize the matter. In order to truly gauge the impact of fracking, Finewood and Stroup suggest a larger-scale examination of the hydro-social cycle, the relationship between water and society.

At an EPA hearing in 2011, public commentary was opened up for the first time in reference to the study on fracking. People from both the economic and environmental sides came out in full force, with representatives from organizations such as the Damascus Citizens for Sustainability and the Independent Oil and Gas Association of New York State

Finewood and Stroup’s neoliberalism argument asserts that a cost-benefit analysis has been implemented to shift focus away from the environmental, hydro-social, and human rights impacts of fracking and incorrectly emphasize the economic benefits. The authors argue that the more powerful stakeholders have been able to shift the narrative by negating the importance of water as a resource and framing natural gas as a sustainable form of energy. To argue that only powerful stakeholders hold this opinion, though, is misleading. In Maykuth’s article on the EPA hearing, he notes that public sentiment is mixed. Local economies in the Marcellus Shale region are seriously struggling, and oftentimes these small communities hold the same perspective as the large private sector energy companies. Though this may be a result of the spread of misinformation, we should still remember not to put constraints on various stakeholder perspectives. We must account for within-group differences and unlikely overlaps in opinions, yet constantly analyze these relationships through the lenses of neoliberalism and the hydro-social scale, as power relations are deeply embedded in our society.

“Strong Positions on Either Side of ‘Fracking’ at EPA Hearing”